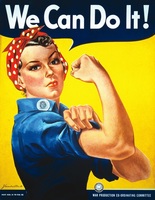 Dissent is our heritage. The LWV grew out of 80 years of protest over women not being allowed to vote. From the first Women's Convention held in 1848, came the commitment "to secure the sacred right to the elective franchise." By 1890 the National American Woman Suffrage Association (NAWSA) was formed with the sole purpose of securing the right to vote.

The idea that women were individuals with the right to citizenship and authority over their persons, children and property was revolutionary. Suffragists were opposed and ridiculed by many, even other women who were shocked by the public display of defiance. By 1917, with almost a million dollars raised, the final push for a constitutional amendment begun.

President Woodrow Wilson called a special session in May 1919 and on June 4 the 19th Amendment was sent to the states. Its wording was the same proposed by Susan B. Anthony in 1875: "The right of citizens of the United States to vote shall not be denied or abridged by the United States or by any state on account of sex."

With victory in hand, the NAWSA  at its Jubilee Convention in St. Louis in March 1919, sought to speed the suffrage campaign in the United States and other countries by creating a new organization, "The League of Women Voters" to finish the fight and to aid in the reconstruction of the nation. NASWA President, Carrie Chapman Catt completed her call to action "The spirit of this new crusade will travel from state to state, from city to city...a nationwide campaign against the world's oldest enemy...ignorance. What should be done, can be done; what can be done, let us do."

On October 29, 1919, the Minnesota Suffrage Association dissolved and became a branch of the national League of Women Voters for the purpose of completing full enfranchisement of women and increasing effectiveness of women's votes in furthering better government. Although the suffrage amendment hadn't officially been ratified, suffragists knew the end was near.  At the National American Women Suffrage Association Victory Convention in Chicago, the delegates officially formed the League of Women Voters on Feb. 14, 1920.